This Is A Call To Action!

Please urge the following legislators to vote NO on the “Blast Motion on HB 465”. This bill would place “sexual orientation” and “gender identity” as protected classes in the Montana Human Rights Act.  This bill would threaten religious freedom and free speech as it has in other states.

Page 9, lines 22-24 specifically say people must be admitted into lavatory, bathing,or dressing facilities based on their gender identities.  It would place women and children at risk, especially in schools, colleges, and universities.  You can read the bill language here – https://leg.mt.gov/bills/2019/billpdf/HB0465.pdf

Please call (do not email) the following legislators and politely ask them to vote no on HB 465.  You can leave a message for up to 5 legislators at one time by calling 444-4800.  Please call ASAP.  This vote could happen within the next 24 hours.

(Laurel, MT) —Today, in a sweeping, 5-2 decision, the Montana Supreme Court rejected the will of Montana voters by striking down, in all its applications, a Montana statute establishing a tax credit to taxpayers who donate to a scholarship fund that helps children attend private schools.

The statute, adopted in 2015, allows tax credits for donations to scholarship-granting organizations.  The Montana Department of Revenue promptly adopted a rule prohibiting religious schools from participating, saying that it would violate Montana’s Constitution.  Three plaintiffs, all Montana taxpayers whose children attend private religious schools, challenged the rule in district court under both the Montana and U.S. Constitutions. They won because, according to the district court, the rule was not required by Montana’s Constitution.

“This outcome is a blow to Montana families, who will now be denied the educational opportunities the tax credit afforded,” said Jeff Laszloffy, President of the Montana Family Foundation, which advocated for the tax program.  “And it is a blow to justice, as an entire statutory provision has been found unconstitutional without any notice—not even to our Montana Attorney General, who has never even had a chance to review or defend the constitutionality of the statute as required in Montana law.”

“But,” he continues, “we will not give up.  We believe in Montana’s children and will continue to support efforts that help provide them with the best education opportunities possible.”

Light at the Legal Tunnel

Earlier this week, I had the pleasure of attending the Alliance Defending Freedom’s Strategic Partners Conference in Washington, D.C. This conference is always one of the highlights of my yearly travel schedule. It’s a timely and intellectually challenging look at the cases and policies winding their way through our nation’s courts, policies that will eventually wind their way into our schools, our churches and even our homes.

For those who don’t know, the Alliance Defending Freedom, or ADF for short, is a Christian legal powerhouse made up of over 3,000 allied attorneys, with nearly 40 wins at the U.S. Supreme Court. Even though the Montana Family Foundation has its own legal counsel, we work closely with ADF on both the state and federal levels.

This year’s conference touched on cases dealing with abortion, religious freedom, parental rights, same-sex marriage and transgender use of restrooms and locker rooms, all areas being actively litigated in courts across the U.S.

One of the highlights for me, personally, came when former Attorney General Jeff Sessions mentioned Montana and described why the U.S. Attorney filed an amicus brief in support of our Espinoza case on school choice. He said the religious discrimination being promoted by the Montana Department of Revenue cannot be allowed to go unchallenged. He also said the time is right to challenge the unconstitutional Blaine Amendments that are imbedded in state constitutions, including the Montana Constitution.

Another powerful speaker at the conference was Walt Heyer, an 83-year-old man who lived for years as a woman, including going through irreversible surgeries that left him physically and emotionally devastated. Finally, through faith in Christ, Walt sought the help he needed to rid himself of the confusion that had plagued him for decades. He’s gone on to help others, and he fights tirelessly against state laws that make it a crime to counsel someone with gender dysphoria or unwanted same-sex attraction.

Just this week, he wrote a powerful article in The Federalist describing a Texas father who was devastated because he’s been ordered by the court to lay out boy’s and girl’s clothing for his six-year-old son every day before school.  The boy’s parents are divorced and the boy’s mother, a pediatrician, is convinced that the boy is really a girl. The boy wears girl’s clothing at the mother’s house, but refuses to wear girl’s clothing at the father’s house. Now, the mother wants the court to force the father to join her in administering hormone blockers to aid her son’s transition to a girl. It’s a tragic story that goes on far too often in our current age of sexual activism. You can read this story at thefederalist.com.

As you can imagine, the big topic at this year’s conference was the appointment of Justice Kavanaugh to the U.S. Supreme Court and what that means for cases currently in the pipeline. Having a strict constructionist majority on the Court for the first time in decades certainly changes the equation, especially for the long line of cases involving far-left public policy coming out of states like California. For the first time in years, we feel that this persistent slouching toward Gomorrah can be stopped.

I came away excited, affirmed in my faith and ready to speak truth to power in our courts and legislature, which is a good thing, because the start of the 66th Session of the Montana Legislature is just a month away.

What’s the Appeal of Communism?

With the 2018 election cycle in the rear-view mirror, we can all breathe a sigh of relief. Gone are the yard signs and those annoying campaign ads, and with all but a few close races that have yet to be decided, the results are what we had expected.

In Montana, Republicans hold strong majorities in the House and Senate, and with Democratic Governor Steve Bullock in firm control of the Executive Branch, the order of the day will be continued gridlock. Some think that’s a good idea; others get frustrated wondering why Democrats and Republicans can’t get along and work together. They don’t realize that the latter is unrealistic. You can’t take two groups of people who are ideologically opposed on every major issue and ask them to compromise their beliefs for the sake of getting along. It simply doesn’t work that way. And I, for one, am glad. I don’t want my legislators to campaign on one set of values, then reinvent themselves when they get to Helena for the sake of bipartisanship, especially when I think the beliefs of the other side are dangerous and risk the long-term health and security of our state, or our nation, for that matter.

And while we’re on the long-term health of the nation, there’s a worrisome trend that raised its head during this election cycle. It began in the primaries with the huge level of support for people like Bernie Sanders and culminated in the election of people like Alexandria Ocasio-Cortez. The trend is the number of voters who seem to think that socialism or even outright communism, is a good idea. We see this especially in younger voters and in the intelligentsia class that controls our colleges and universities. The problem is that they understand communism in a theoretical sense. I, on the other hand, have had the chance to witness the effects of communism, first-hand, in places like China, Vietnam, Laos, and the former eastern bloc nations.

What I’ve seen bears little resemblance to the theories taught in college level Political Science classes and even less resemblance to the equality and social justice promised by politicians like Ocasio-Cortez to people in the less well-off neighborhoods of New York City. Planned economy shift power to a central government, and always, ALWAYS, result in a lower standard of living, less freedom and less security.

Such is the case currently for the Christians in China. We’ve seen for years the persecution that comes in waves. The government strikes hard, then backs off, then strikes hard again.  Ironically, it never seems to make the nightly news here in America. But the crackdown on Christians has begun again. Churches that I’ve been to are now shuttered with police blocking the entrances. Christian pastors are disappearing in the dead of night. Those who take Bibles into China are reporting even more confiscations at the borders, and Christians that once met publicly are, once again, being forced underground.

This is the reality of communism, and unfortunately, it’s the reality for Christians living in communist countries around the world. Fortunately, the Chinese government has been known to back off when public pressure is applied. We’re asking everyone to call or write the Chinese ambassador in Washington, D.C. and tell them to stop persecuting Christians. It’s time to wake up. The story of Christians in China will become the story of Christians in America if socialists continue to gain ground in the U.S. Congress. 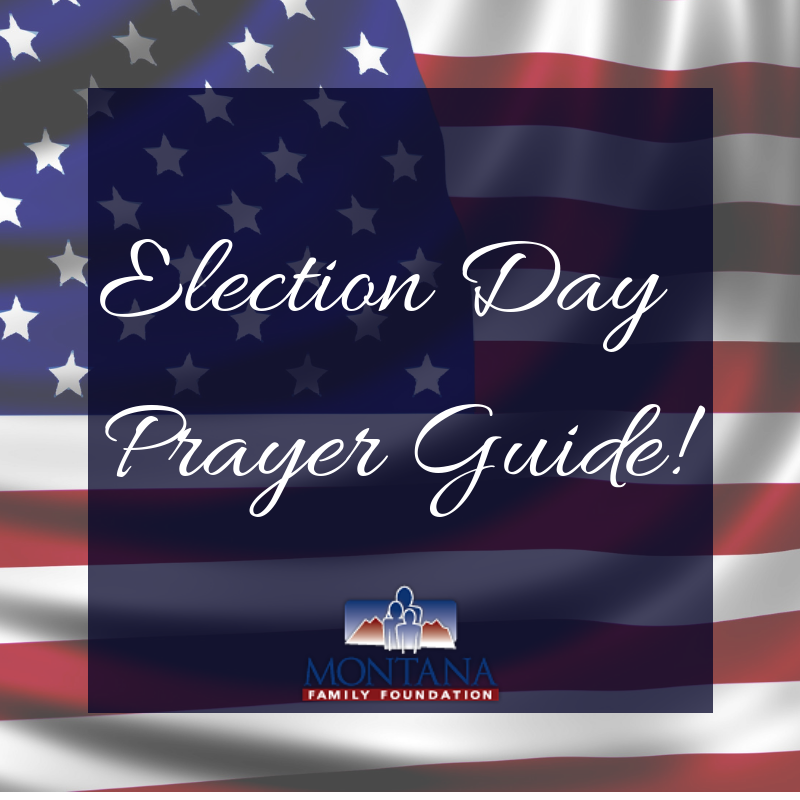 When the righteous are in authority, the people rejoice; But when a wicked man rules, the people groan.

Join us for the next 14 days as we commit to pray for the election at 8:00 am, Noon, and 8:00 pm.  To help guide you in your prayers for the election, we have created an Election Prayer Guide.  Together, God’s people will be praying and covering specific aspects of the election. It is in prayer that we have the opportunity to partner with God for His plans and purposes.

Godly leaders make a difference and can help protect our religious liberties, the sanctity of life, traditional family values, and so much more.  Please join us as we cover this election in prayer.  You can download the Election Prayer Guide here – Prayer Guide. 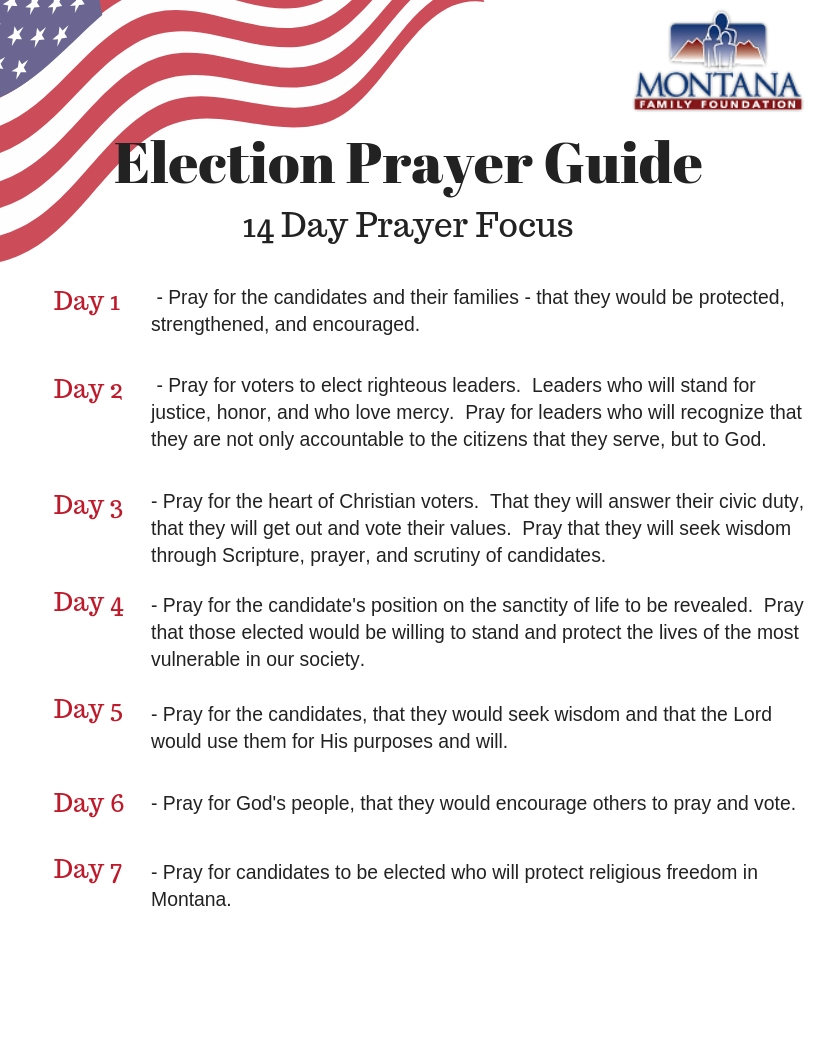 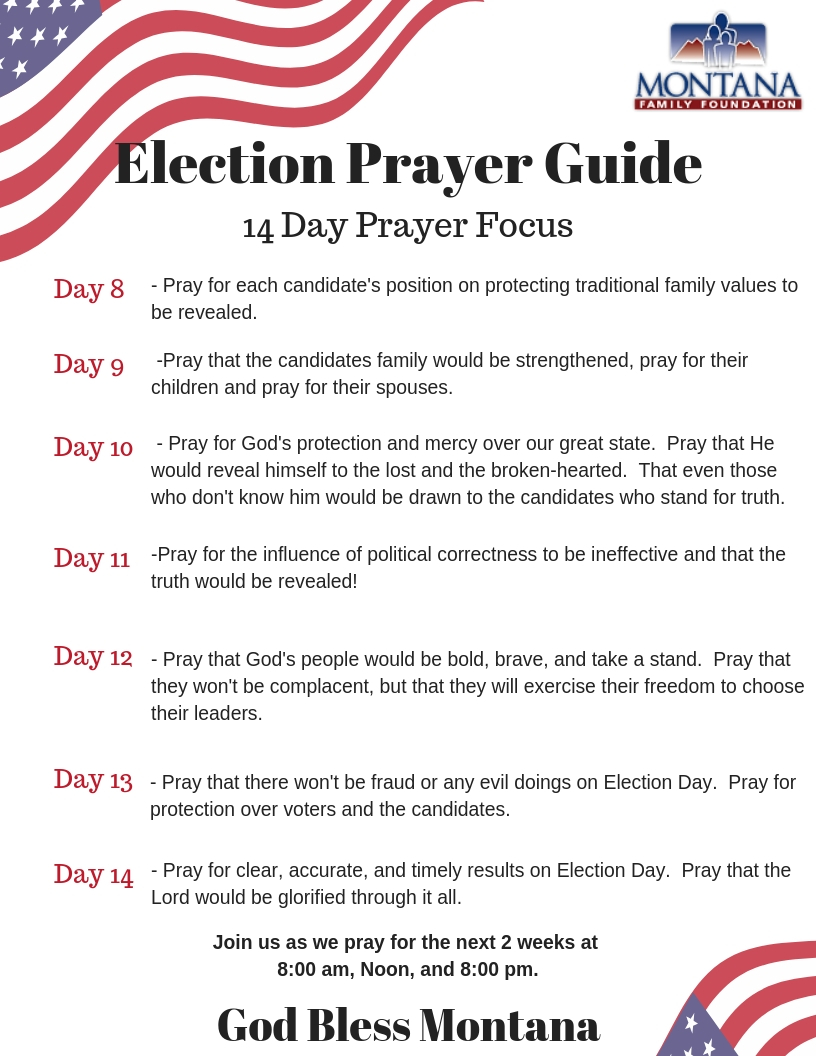