Our Lives, Our Fortunes, Our Sacred Honor 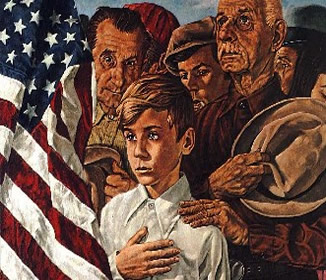 As we celebrate Independence Day, I’m reminded of a day in 2002 that brought me as close as I’ll ever get to those who began the quest for an independent nation. It was March, I was in Washington D.C. on business, the tulips were in full bloom, the cherry trees around the tidal basin were nearly in bloom and I had some time to kill. I’d never been to the National Archives so I decided to head that direction. Since it was March, the hordes of summer tourists had not yet descended on the city, the line was short, and I walked right in.

As I approached the Charters of Freedom exhibit in the Rotunda, the diffused light gave it an eerie feeling. Then suddenly I was looking at the Magna Carta, the Declaration of Independence, and the Constitution of the United States. The last line of the Declaration in particular caught my eye. It read, “And for the support of this Declaration, with a firm reliance on the protection of Divine Providence, we mutually pledge to each other our lives, our fortunes, and our sacred honor.”

It’s not possible to be in that place, looking at those documents, reading those words and not think about what was left to us by our Forefathers. Have we done a good job maintaining the republic that they pledged their lives to create? Would they look at the United States today and be proud of us? What words of encouragement would they give? Would there be words of rebuke?

Somehow I believe they would understand how difficult it is to keep people with wildly divergent worldviews all pulling together in the same direction. I believe they were also students of human nature, and human nature never changes. The struggles they faced nearly 300 years ago are the same struggles we face today. They may look a little different because of advances in science and technology, but at their core they are still driven by the same human desires, passions, and vices.  Give Today!

Later that afternoon I had an appointment to visit the diplomatic reception rooms in the State Department. When you arrive you find yourself in a re-creation of an 18th Century mansion; it’s actually a working museum. The furniture is original Duncan Phyfe and Chippendale, the paintings on the walls are original, and the Benjamin Franklin State Dining Room is four times larger than the State Dining Room in the White House.

One of my favorite rooms is the John Quincy Adams State Drawing Room, and for good reason. Near the entrance is a stand-up writing desk, upon which Thomas Jefferson penned part of the Declaration of Independence. To think of Jefferson standing at that desk concentrating, trying to come up with just the right words, gave me goose bumps. Then I turned and saw a corner cabinet filled with exquisite silver: tea cups, coffee cups, gravy boats, knives, and spoons. The mere beauty of each piece was enough to admire. Then I found out that many of the pieces were made by none other than Paul Revere.

Here I was, standing beside a desk that Thomas Jefferson penned the Declaration of Independence on, looking at silver made by Paul Revere, having earlier in the day seen the original Declaration of Independence and the United States Constitution. I must admit, for someone who loves America and loves history, it was a bit overwhelming. As we celebrate the Fourth of July this year, let’s remember our heritage, rely once again on the protection of Divine Providence, and pledge once again our lives, our fortunes, and our sacred honor.