Today the Montana Family Foundation released information about public opinion on the federal government’s new transgender schools directive. The foundation commissioned a poll that surveyed 450 likely voters, yielding a margin of error of 4.62%. 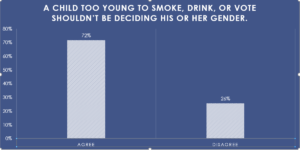 In the poll, 62 percent of Montanans oppose the transgender school directive while only 29 percent support it. Even in the Missoula media market, 55% oppose the directive while only 38% support it. 72% percent believe high school is too early to make a decision to change gender. Among parents with children, opponents of the directive outnumber supporters by at least 2-1, and in some cases 3-1. Meanwhile, not even a quarter of likely voters believe discrimination against transgender people is a problem in Montana. 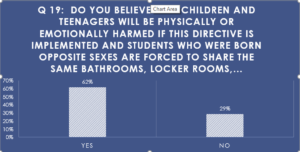 The risk of invalidating Title IX protection for Montana’s female athletes also drew a strong response. 67% of Montanans agreed with the following statement: “Opponents of the directive point to the fact that boys who self-identify as girls will be encouraged to play on organized sports teams with biological girls, despite the boys’ possible anatomical advantage in height, weight and strength. This has the potential to invalidate Title Nine protection for girls, since biological sex assigned at birth is no longer a clear line.  This will have a dramatic effect on women’s sports.”

Already in Alaska, one person who was born male but identifies as a girl has competed and won medals in girls’ track and field, resulting in a female athlete not having the chance to compete in the state tournament. 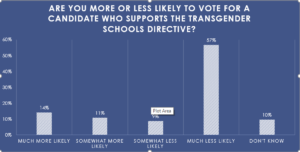 Also noteworthy during this election season is the fact that 68% of those polled would be less likely to support a candidate that supported the transgender school directive.

Laszloffy concluded, “We’re calling on all candidates to sign the pledge to resist this directive. It’s a classic example of federal overreach. It jeopardizes local control and negates protections for girls’ sports under Title IX.”

In depth analysis of poll results is available by clicking here.